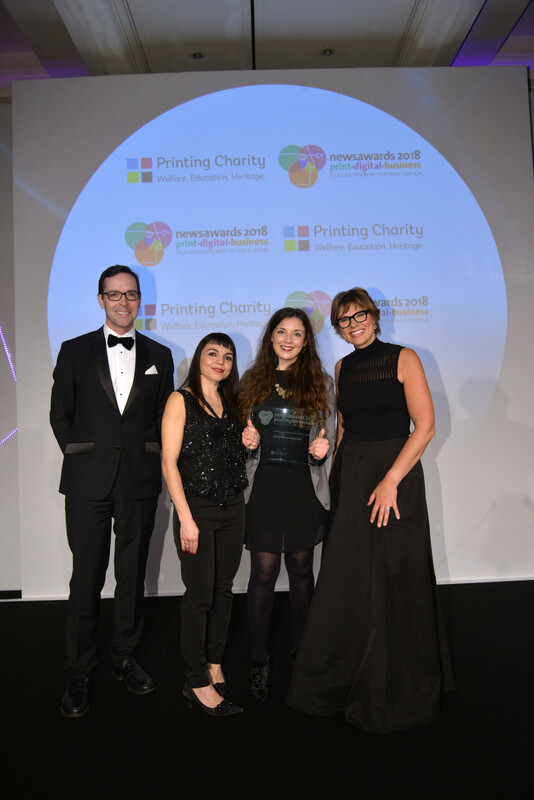 We had a fantastic evening at Production Journal’s newsawards 2018 and were pleased to sponsor the International Printed Innovation of the Year Award open to all UK and international newspapers.

Congratulations to all the nominees and winners. The awards are proof that print is alive and well in a resilient industry that continues to adapt and innovate.

What does print mean to you?

That was the question we asked London College of Communication (LCC) photojournalism students, who took part in our collaborative project with LCC to explore and celebrate print in today’s society.

The students’ submissions were illuminating as, rather than featuring everyday printed consumables, their focus was on craft skills and the human element involved in creating print. These ranged from print collectives and handmade zines to screen-printing and traditional photo processing.

Work selected from the eight finalists, who will receive a Print Futures Award, will be displayed at our Annual General Meeting in June and our Annual Luncheon in November.

Matt Guy, London College of Communication’s Partnerships Manager, says: “Industry live briefs such as this give LCC students an opportunity for real work with a client. As well as giving the students a chance to practise their technical skills, working with a client develops their confidence and other soft skills. This will help them to get good jobs once they graduate. We’re really pleased that The Printing Charity continues to support professional development in this way.”

The Printing Charity is pleased to announce that Lionel Barber, Editor of the Financial Times, has accepted its invitation to be the charity’s 2018 President.

Lionel Barber says: “At a time when the print industry faces diverse and important challenges, The Printing Charity does crucial work in both protecting the industry’s heritage and supporting its future. I am delighted to be involved with the charity as its President this year and look forward to meeting the many people who make the British print industry, which I have been a part of for almost 40 years, such a rich and varied business.”

Since his appointment in 2005 as Editor of the FT, he has helped position the FT as one of the first publishers to successfully transform itself into a multichannel news platform. During his tenure, the FT has won many global awards for its journalism, including four Newspaper of the Year awards, which recognise the FT’s role as a ‘21st century news organisation’ and the new FT.com being named Website of the Year at the 2017 Press Awards.

He has co-written several books and lectured widely on foreign policy, transatlantic relations, European security and monetary union in the US and Europe, and appears regularly on TV and radio around the world. He has interviewed many of the world’s leaders in business and politics, including Donald Trump, Barack Obama and Angela Merkel, and received several distinguished awards, including the St George Society Medal of Honour for his contribution to journalism in the transatlantic community.

Neil Lovell, The Printing Charity’s Chief Executive, says: “We are thrilled to have Lionel Barber as our President this year. He follows many distinguished charity Presidents, including the late Baroness Dean, and will, I am sure, enjoy his involvement this year. The Chair of Trustees, Jon Wright, and I look forward to working with him.”

The award now in its 3rd year, was launched in memory of Victor Watson CBE DL to recognise a Young Person of Outstanding Achievement. It is open to any young person (under the age of 31 at the time of the presentation) employed in the printing industry – which includes the printing supply chain, from journalism through to all aspects of printing and allied trades such as: printing, publishing, manufacturing or operating presses, driving, cleaning, advertising, photography, graphic arts, making ink and recycling paper. The nominator and nominee do not have to be associated with any particular organisation.

Speaking about the award, Robert McClements, President of CDi, commented, “Which young person do you know who deserves your nomination? The Victor Watson Trophy is a fantastic way to celebrate their achievements – this recognition is so important and it’s in your hands. We have seen the emotional reaction of all who are nominated – for winners and those who are highly commended it’s hard to capture their surprise that someone they respect has taken the time to say, “Well done, we really appreciate you”. Take a look at the pro-forma nomination form – the process is not difficult.”

Please email all nominations to Sophie Chater at sophie.chater@bpif.org.uk by 8 June 2018.