The UK printing industry continues to defy its own forecasts as both output and orders displayed positive growth, above the expectations for Q1 – unfortunately the Q2 forecasts reveal that concerns remain. The latest Printing Outlook survey shows 43% of printers increased output levels in the first quarter of 2018. A further 37% held output steady whilst 20% experienced a decline in output. The resulting balance (the difference between the ups and the downs) was +23; up on the forecast of +12 for Q1 and greater than the +19 recorded in Q4. Whilst the Q4 period was notable for the absence of a seasonal boost, it seems that some of that trade may have carried into the first quarter. This is the first time for seven years that Q1 output has outperformed Q4. Furthermore, the current Q1 output balance is slightly greater than the trend line for growth over the last four years (which sits at a flat 20% balance over the entire period).

Recent forecasts have turned out to be on the pessimistic side, Q1’s above-trend performance has done nothing to dispel the pessimism. In fact, the expectations for Q2 have now fallen into negative territory, and to a level that has not been experienced since Q1 2016. 29% of respondents predict that they will increase output levels in Q2, a further 41% expect output levels to hold steady. However, 30% forecast that output will fall in Q2. The forecasted balance of -1 would, if realised, be a significant downturn from Q1. 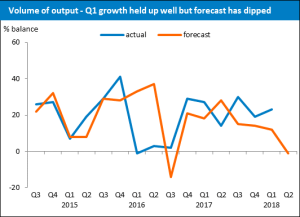 The output balance of +23 was above the forecast of +12 for Q1. A balance of -1 is forecast for the coming three months.

Confidence in the general state of trade in the printing industry flatlined in Q1 – whilst it remained marginally above the negative forecast, the expectations for Q2 show that confidence has eroded further. It seems the industry is expecting a tough trading period in Q2, and an intensifying battle to maintain output and minimise cost pressures. On this occasion the Q2 period may well be characterised by supply-chain cost and delivery concerns, wage pressures coming through and new legislative costs and burdens coming into force.

Competitors’ pricing below cost continues to be the most voiced business concern – the proportion selecting it this quarter is unchanged from last quarter; it remains at 70% (it was 65%, 70% and 81% in the preceding quarters). Paper and board price concerns remains the second ranked concern; this was selected by 63% of respondents, up from 60% last quarter (and 47%, 42% and 32% in the quarters prior to that). Access to skilled labour remains the third ranked concern, with 27% of respondents selecting it (down from 32% previously).  Access to skilled labour remains above late payment by customers which has returned as the fourth-ranked business concern. 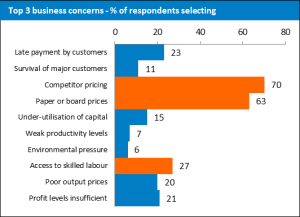 We have been collaborating with Begbies Traynor to develop further relevant industry and sector analyses; some of which we are introducing in the latest Printing Outlook report. We have now compiled a detailed financial health analysis of data for the 5,000 largest print and printed packaging companies (as selected by total asset value ranking). The financials for each company have been rated and updated over time – analysis of this will provide some interesting insights and benchmarks. 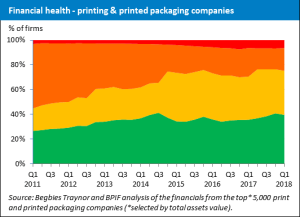 “Producing the Printing Outlook report is only possible with a high reliance on collaboration – from responding members, other industry trade associations, sources of economic information and other relevant contacts. We are now working with Begbies Traynor and Red Flag Alert to develop our industry analyses. Not just so we can represent the industry but to provide more useful information back to the industry. We will continue to work with Begbies Traynor to develop the industry model and showcase more analysis from it.”

“Brexit has taken a bit of a back seat this quarter as we wait to see what happens next during the negotiations. However, our latest Brexit Barometers suggest that the economic outlook confidence during negotiations has become slightly less negative whilst the post-Brexit outlook become more negative. In the meantime there are plenty of other matters for businesses to focus on. Costs pressures are mounting and margins are being squeezed further, as it remains difficult to raise prices. Companies must therefore keep a close eye on job profitability, work mix, and, as ever cash flow.”

Featured in Printing Outlook this quarter:

For further information on Printing Outlook go to www.britishprint.com/printingoutlook